This morning I went to the Sunday Market at Marsh Barton in Exeter for the first time in over a year.  I really like flea markets, street markets and car boot sales.  You never know what you’ll find.  When I was growing up in Southern California, we used to go to the swap meet most Sunday mornings, usually located in a drive-in theatre, with our red Radio Flyer wagon in tow.  I learned how to drive a hard bargain by the age of nine.  I used to buy things like deer skulls, MAD magazines, old chemistry sets, and once, a fox fur, complete with head and feet.

Today I bagged some sweet bargains. 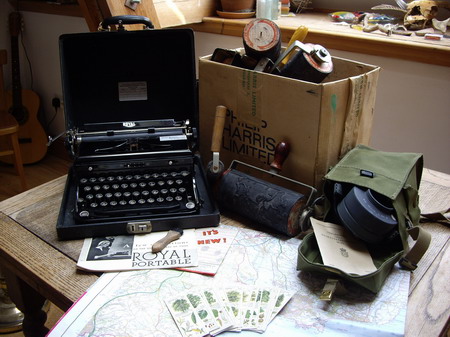 A mint condition Royal portable typewriter with Touch Control.  It was last serviced in 1991 by the Wigan Business Equipment Co in Lancashire and types like brand new.  These were manufactured by the Royal Typewriter Company, New York, NY, USA and distributed by the Visible Writing Machine Company, Ltd., London, England. 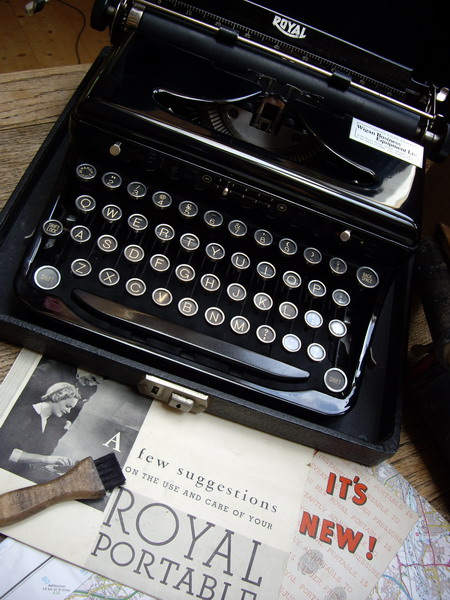 If you’ve read my last couple of posts you’ll be as thrilled about this one as I am . . . 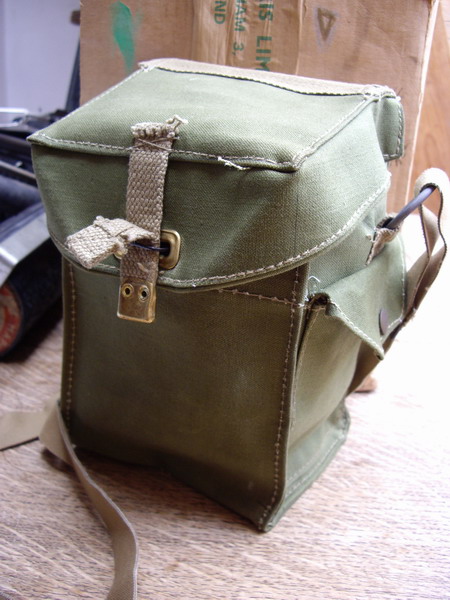 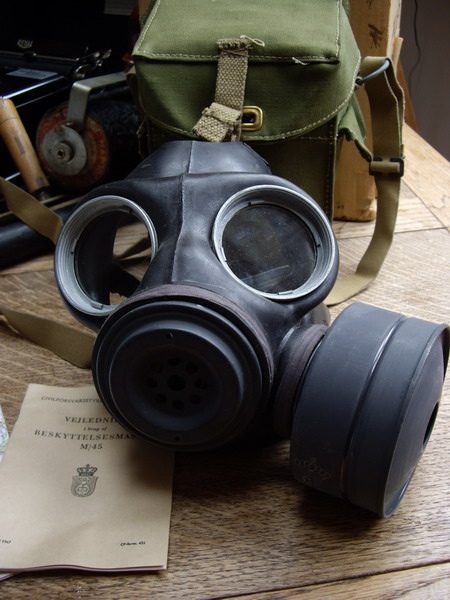 This pattern of gas mask replaced the hose-type mask, and was first issued to Paratroopers and Airborne units, hence the fact that most people refer to them as the “Lightweight Para” issue. However, as time went on they became issued to all units, including Infantry, Corps and the ATS.  These masks were made in England during WW2, and carry a variety of dates on them – usually 1942-1944. They were sent to the Danes after WW2, where they were carefully kept in storage for emergency use.  The instruction manual that comes with the mask is written in Danish.

Very trippy, because this is the exact model of the gas mask I got in Digbeth AND I am this far (thumb and forefinger 2 mls apart) from planning a trip to Copenhagen for a few days. 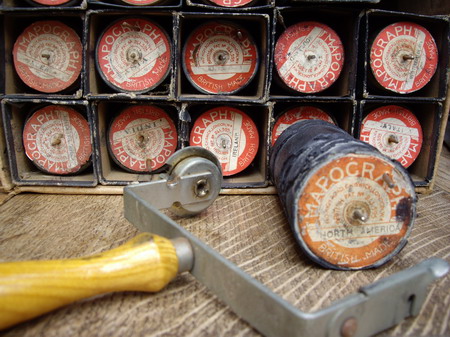 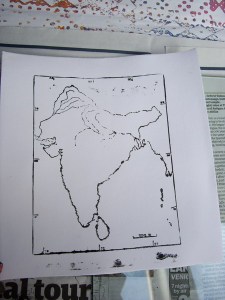 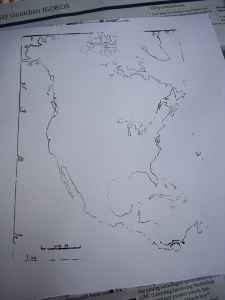 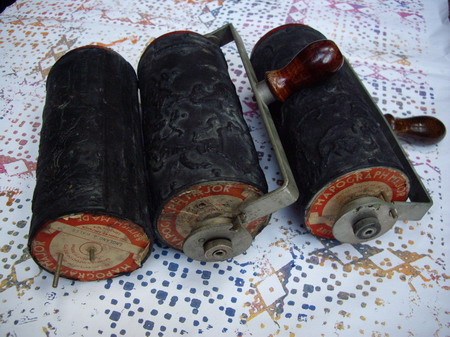 I couldn’t find any information on these. Just a post on General Pattern, a blog by James Brown – illustrator and print maker.  I suspect that they were used in schools to teach Geography or Cartography.

The Mapograph rollers came in an ink stained box from guess where? 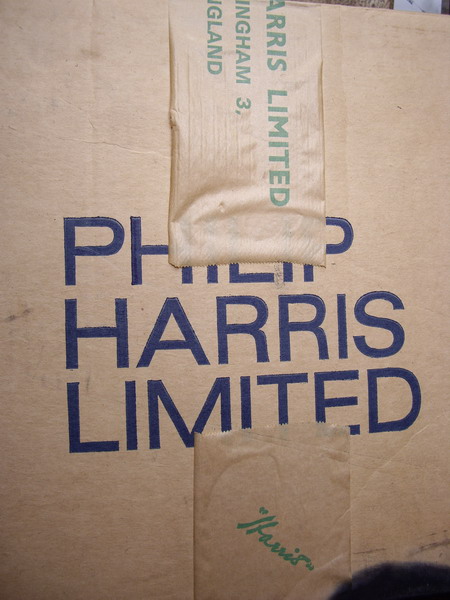 Yup, Philip Harris Ltd., suppliers of scientific equipment and resources to teachers and technicians since 1817.  The company was originally based in Digbeth, Birmingham.  The company traded as a wholesale Chemical Laboratory Company occupying its Bullring site until 1889.  They moved to 144-146 Edmund Street at some time around the turn of the century.

In its heyday the company was known to all science teachers in the UK (and many world-wide) as one of the two “first-call” suppliers for the peculiar needs of school science. Philip Harris Ltd. has now been subsumed into a succession of larger, more anonymous corporations.

Last but not least, a complete set of 25 ‘Trees of the Countryside’ Ty-phoo Tea trading cards.  Ty-phoo Tea was created by Birmingham grocer John Sumner Jr. in 1903 to sell in his shop.

Gosh, lots of roads leading to Brummie these days! 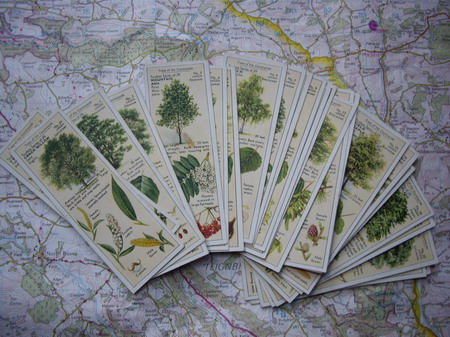 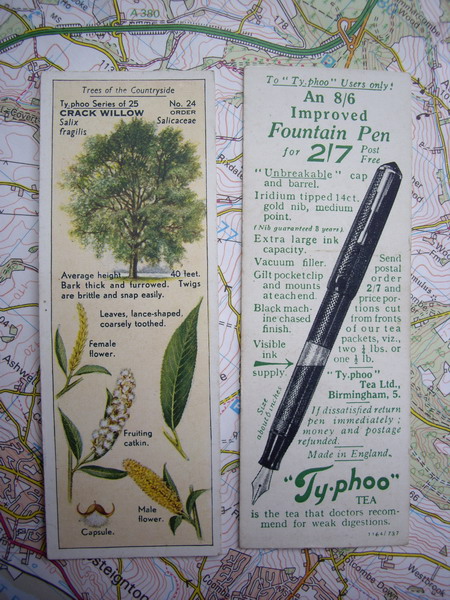 Here’s a link from the Special Branch pages of The-Tree – a resource and meeting place for tree lovers and green activists, which shows each card in this series in full detail.

The man who sold them to me said that when he was a boy in the late 1940s he and his mates would play a game in which they’d pitch marbles, conkers or trading cards at a wall and the one whose landed closest to the wall would win the lot.  I used to play a similar game called ‘Pitching Pennies’.

The next time I go I’ll take some photos at the market to give a feel of the Zeitgeist, the spirit of the place.  I realise that I tend to get very up close and filter things through a very tight lens.  Could it be time to look at the big picture????

Processing…
Success! You're on the list.
Whoops! There was an error and we couldn't process your subscription. Please reload the page and try again.