When most people consider the word ‘holocaust’ as a historical event, they think of the European Jewish Holocaust.  For the Houston Holocaust Museum’s Butterfly Project, the museum has been collecting handmade butterflies in an effort to remember the 1.5 million children who perished in the Nazi Holocaust.

My six butterflies are based on the Native American Holocaust, which was perpetrated upon the indigenous people of North America by European invaders and once the United States of America was formed, by the US government.

Authors such as the Holocaust expert David Cesarani have argued that the government and policies of the United States of America against certain indigenous peoples in furtherance of Manifest Destiny constituted genocide. Cesarani states that “in terms of the sheer numbers killed, the Native American Genocide exceeds that of the Holocaust”.  There are 37 Museums in the U.S. dedicated to the Nazi Holocaust.

Attorney Peter D’Errico makes a cogent argument for the establishment of a Native American Holocaust Museum in this article in which he refers to the ‘duty of memory’.

“It seems that the first “duty of memory” is to remember. And how do we remember? By searching out the past, looking for evidence, facing facts, poking through facades, ignoring excuses, refusing lies.”

I belong to the Muscogee (Creek) and carry the tribal and personal memory of our holocaust, the Indian Removal Act 1830 and the resulting Trail of Tears, in my blood and the collective history of the Native American Genocide deep in my bones.  Sometimes this history weighs heavy on my soul.  I try to give this pain a voice and to express it through my artwork.  It heals me and I believe that it somehow heals my ancestors. 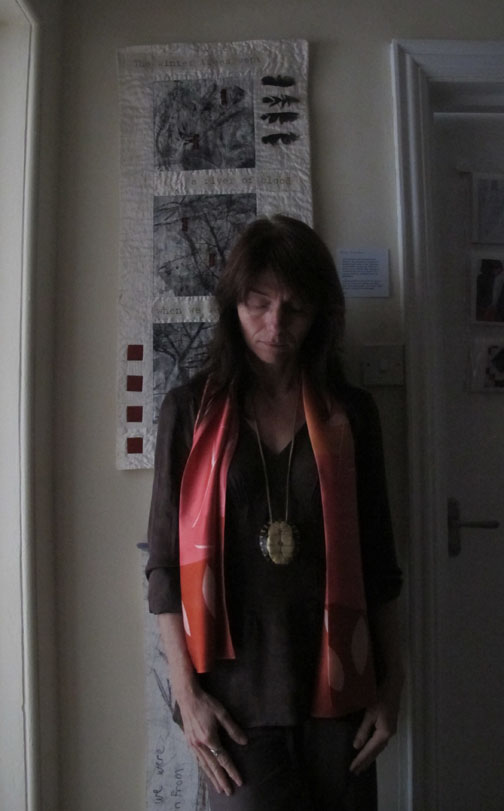 In 2010, I made two Holocaust Butterflies for the Butterfly Project based on images of  Comanche children and words from the (broken) 1865 treaty between the Comanche and the US Government.  My butterflies combine text and photographs printed onto paper. 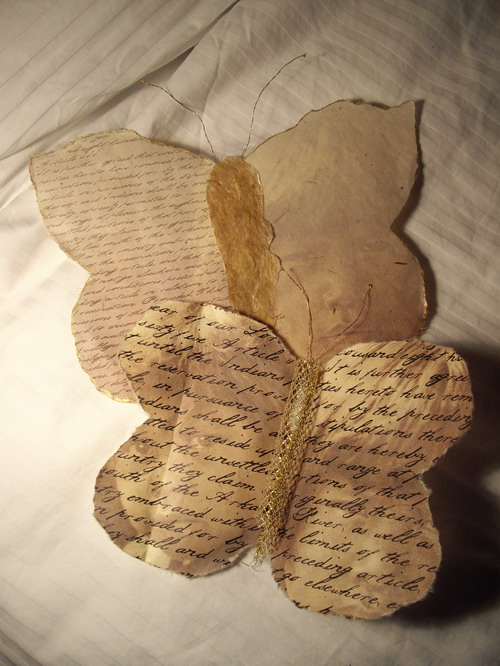 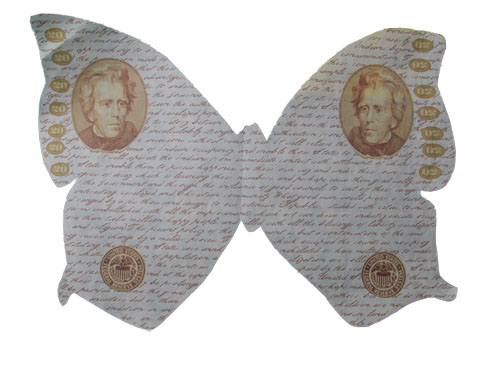 And is it supposed that the wandering savage has a stronger attachment to his home than the settled, civilized Christian? Is it more afflicting to him to leave the graves of his fathers than it is to our brothers and children? Rightly considered, the policy of the General Government toward the red man is not only liberal, but generous. He is unwilling to submit to the laws of the States and mingle with their population. To save him from this alternative, or perhaps utter annihilation, the General Government kindly offers him a new home, and proposes to pay the whole expense of his removal and settlement.
– Andrew Jackson 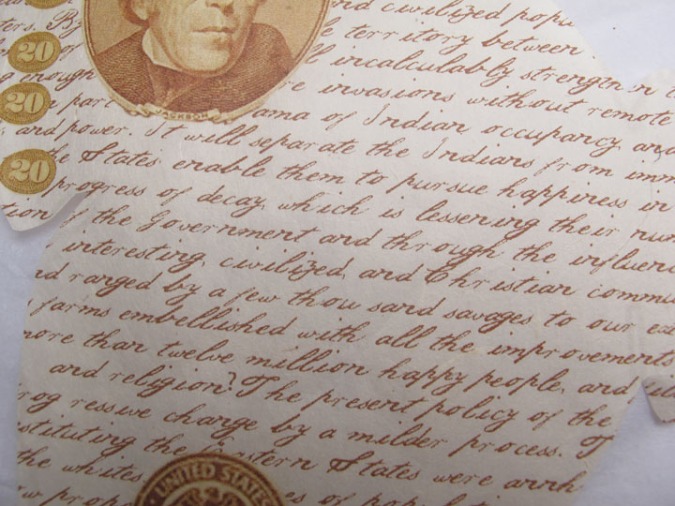 Since the Butterfly Project focuses on children,  I spent an afternoon researching Indian Boarding Schools, whose mission was to ‘Kill the Indian, save the man’.  With the founding of the Carlisle Indian Industrial School in 1879 the U.S. Government launched an effort at what is now called cultural genocide where Indian children were taken away from their families and put into boarding schools for three or more years.

Residential schools had a specific goal which was . . . institutionalized assimilation by stripping Aboriginal people of their language, culture and connection with family. the results for many, have included a lifestyle of uncertain identity and the adoption of self-abusive behaviours, often associated with alcohol and violence, reflect a pattern of coping sometimes referred to in First Nations as, “The Residential School Syndrome” (McKenzie & Morrissette, 2003, p.254).

More than 100,000 Native children in the US were enrolled in off-reservation boarding schools. Parents who refused to give up their children were imprisoned and their children were forcibly taken away. The first school was founded in 1879 by Richard Pratt, an army officer, who based the system off a school he developed for a prison in Florida. The schools were funded by Congress and run by churches and missionary societies. Pratt mandated that the children be taken far from their homes at an early age and not returned until they were young adults. In the boarding schools boys were taught menial labor and girls housework. They were forced to convert to Christianity, embrace Western culture, and speak only English. Native languages and traditions were prohibited and severely punished. Children were subjected to physical, emotional, and sexual abuse by the priests and nuns in charge. Torture was used to punish native language use; children were involuntarily sterilized and died of disease, beating, poisoning, hanging, starvation, strangulation, and medical experimentation. By the 1930s most off-reservation boarding schools were closed, but today boarding schools still exist within reservations.

Most of what I read and all of the photographs were very difficult to process.  The one photograph that undid me however was of a nun standing in a classroom of Indian children. 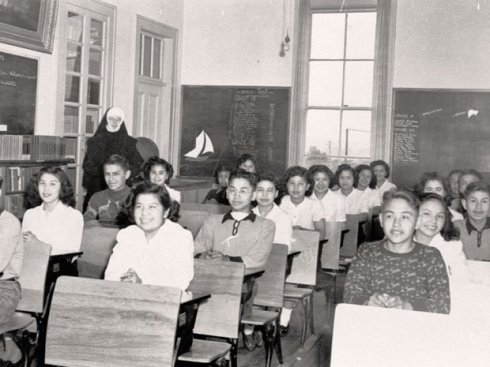 My Muscogee bloodline comes through my father.  Although my father did not get sent away to boarding school, his mother almost certainly had been. I can remember my Dad saying that he went to a Catholic run school and that the nuns were very cruel.  He also said that he could understand Muscogee, but couldn’t speak the language.  He wouldn’t have been allowed to.  In contrast, his grandmother Malindy Davis nee Philips, a full-blooded Muscogee (Creek) Indian could speak no English.  So in the space of two generations, the language was lost, the Indian was killed.  The man was saved, but the price paid was a dark legacy.

I had a pretty difficult relationship with my father.  Through this healing work of reclaiming  and understanding my Muscogee heritage and legacy I am coming to understand and feel compassion for my Dad. 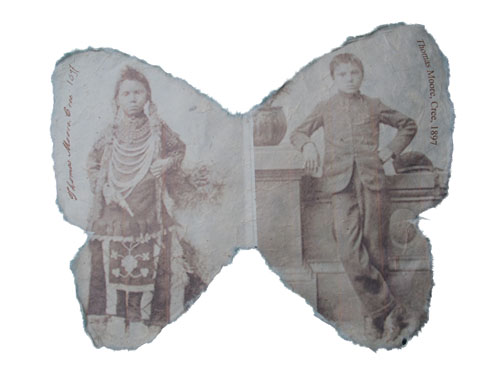 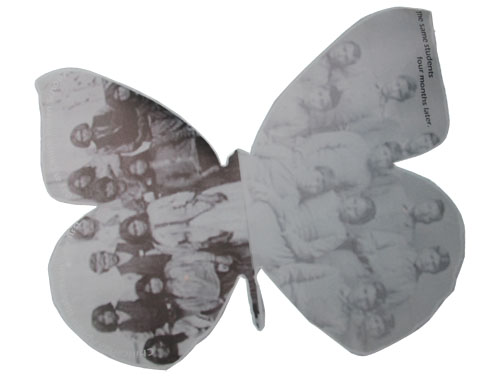 The definition of intergenerational impacts and the legacy of residential schools abuse follows:

“Intergenerational Impacts” refer to “the effects of physical and sexual abuse that were passed on to the children, grandchildren and great-grandchildren of Aboriginal people who attended the residential school system.”

The list below of impacts that intergenerational Survivors face on a day-to-day basis: 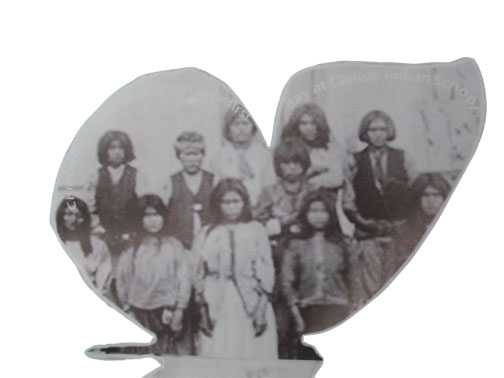 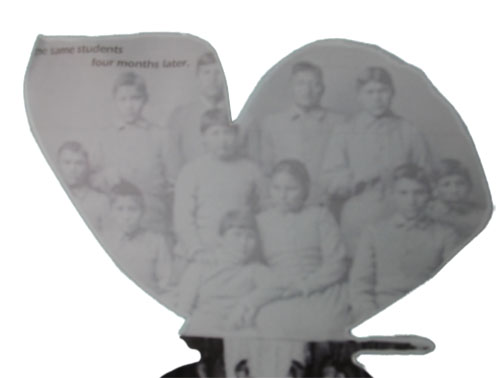 The Chiricahua Apache butterfly is printed on heavyweight architectural tracing paper which transmits light.  An interesting effect for future projects. 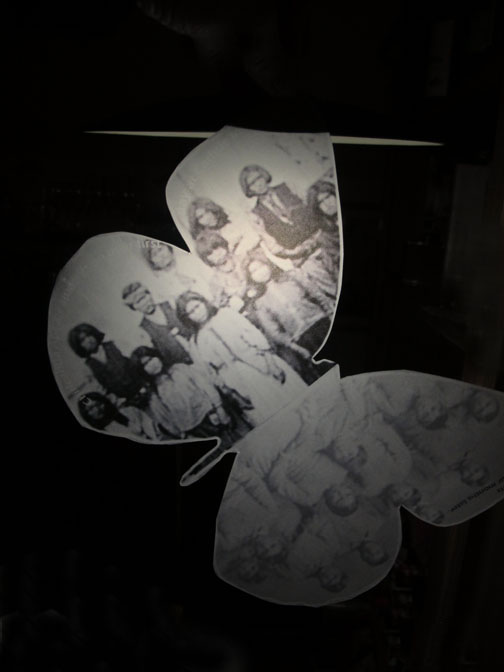 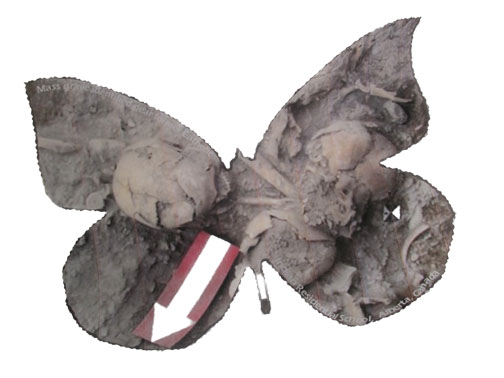 I finished my final four butterflies by adding bodies and antennae. 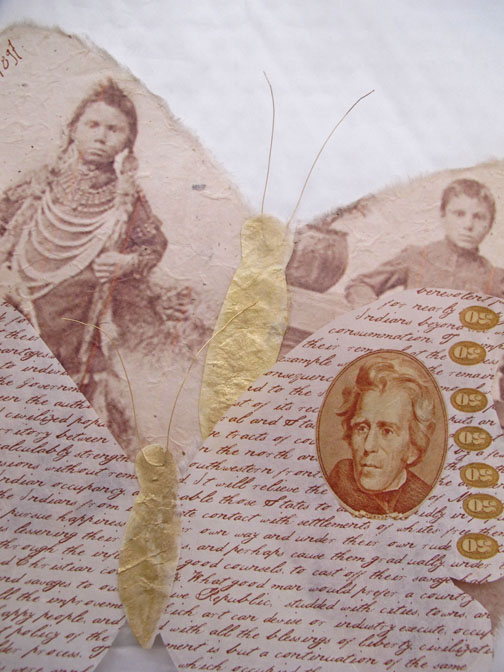 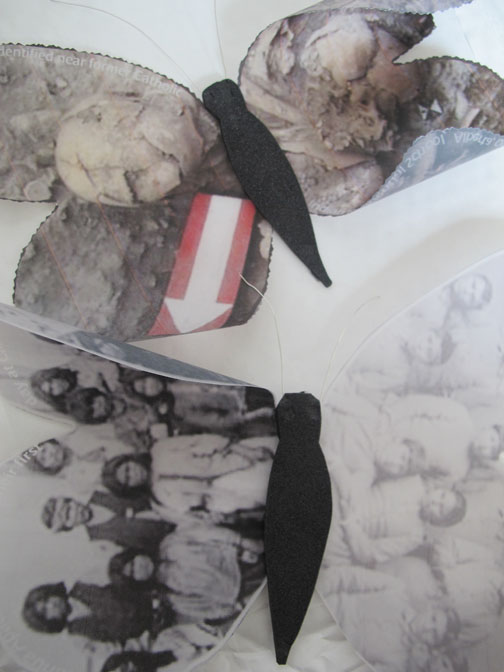 I sent them off to Houston last week where they will represent a fraction of the forgotten children of the Native American Holocaust.