The first time I exhibited my art work about my Muscogee (Creek) heritage, I was shocked when someone said to me ‘You are so lucky to be part-Indian’.  I wish that I had the wherewithal to ask just what she meant.  The history of all indigenous people in the United States is marked by physical and cultural genocide, and land theft and we have all inherited a legacy of Historical Trauma and Unresolved Grief.

I grew up in the 1960s and 70s with a father who felt very ashamed about his Muscogee ancestry.  My dad Frank was born in 1919 to my Muscogee grandmother Mattie Davis.  His father Ted Schwakhofer was of Austrian-American heritage.  Both of my grandparents were 16 years old.  My grandfather had nothing to do with his son or the mother of his child.  All that my dad received from him was his surname.

My dad said that he could understand the Muskogee language, but never learned to speak it.  The White kids called him a ‘Half Breed’ and the Muscogee kids didn’t like him because he was part White.  From 1920 onward, Native American children in Oklahoma were educated in the mainstream school system, where they and all of the other pupils learned that Indians were ‘savages’, although my dad used to argue with his teachers about this.  My grandmother Mattie would have gone to a residential school where students were actively discouraged from speaking their native tongue by having their mouths washed out with soap, or worse.

My brother, sister and I grew up knowing we’re part-Indian, but not much more than that.  My dad used to get The Muscogee Nation News delivered to our house and letters from distant relatives in Oklahoma, but by and large, he’d cut himself off from his ancestry.  I grew up wearing my Muscogee heritage like a cloak of shame.

I’ve come back to working with fibre and textiles in the past several months.   I’ve been studying an inspiring book by textile artist Rosie James.   I took the plunge into a machine sewn portrait of my dad onto paper printed with the front page of The Muscogee Nation news from 1978. 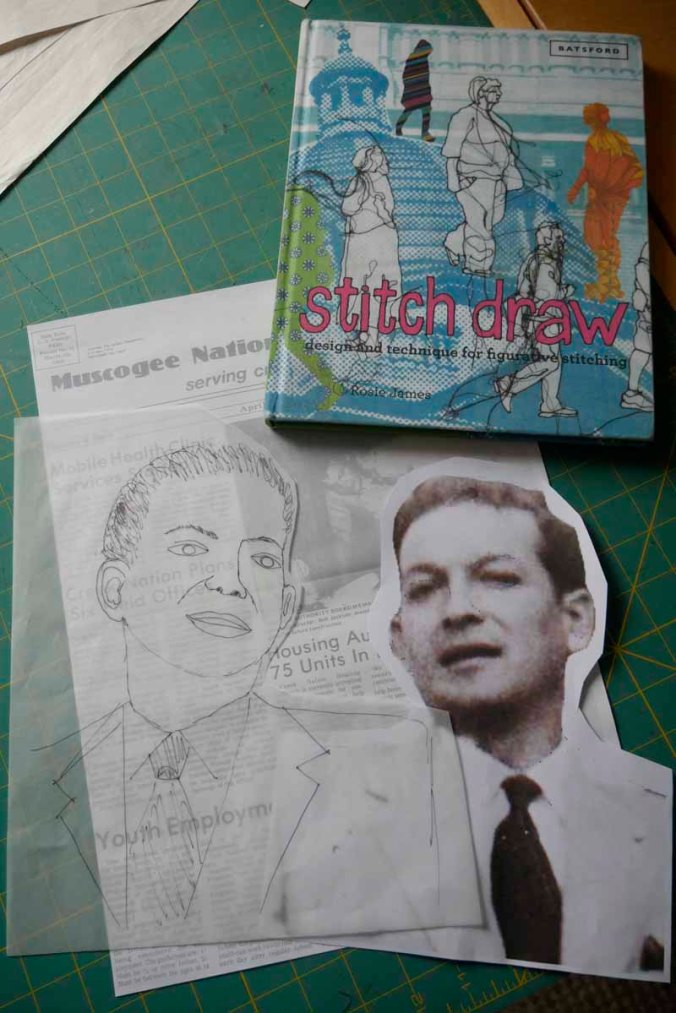 I made a line drawing from a photograph and printed off some text to make a layout of the piece. 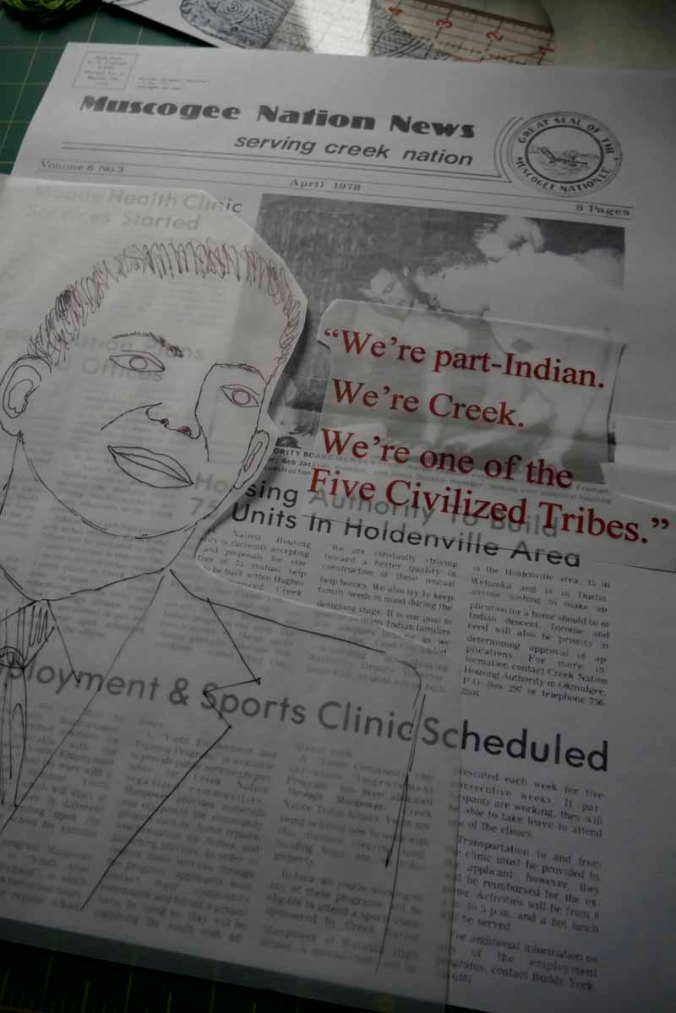 This is how it looks from the back.  I had originally thought about stitching through the fabric onto the front of the paper so had traced the picture onto the cloth.  It gives an interesting effect which I may explore in later work.

My Dad used to have The Muscogee Nation News delivered to our house in West Covina, California and kept them in a drawer.   He’d read them at the dining table, drinking a beer,  He’d say: “We’re part-Indian.  We’re Creek.  We’re one of the Five Civilized Tribes.”