My Vne Este Mvskoke exhibition came down last Thursday.  Through this ten-year body of work, I have used art making to talk about my journey into my Muscogee heritage and to tell unspeakable stories from my tribal and personal history.

I have also created the opportunity for myself to stand up and talk to people about my work and about issues relevant to Native Americans.  I spoke about my current exhibition at two Private Views that I held.  Throughout my exhibition, I also had a Pop Up Native American cinema in which I raised funds for the National Indigenous Women’s Resource Center in the US.  Before each screening, I spoke about the issue of Missing and Murdered Indigenous Women in North America and then introduced the film.   And last Friday I gave a 45 minute talk and dinner about my current exhibit and my Mvskoke Journey.

To be at ease when speaking in public before an audience was a goal that I set for myself about a year ago.   I’ve recently read my poetry at public events, and through my work with Art Raft for Health, I have found myself standing up before funders to talk about it.  But I have not found public speaking comfortable.  My breathing becomes shallow.  My voice goes quavery and comes from the top of my chest.  I also rush and try to cram as many words as I can into the small space I feel has been allotted to me.

I know that this comes from having grown up in a society where, as a woman, I have not been given the space to speak and to be listened too.  Woman who speak are labeled nags, scolds, bossy, shrill or (fill in the blank).  Nor have I had much opportunity to see and hear other women taking their space to speak about what matters to them.  In fact, in films female characters feature in less than 20% of speaking roles.

A friend of mine helped me to become aware of my breathing and to deepen into a place of strength and confidence when I speak before people.   Talking about my art work, my ancestors and past and current issues in Indian Country gave me a reason to move into a deeper place.   My copywriter husband helped me to craft my story into a concise and meaningful talk.  I consider my self a pretty good writer, but writing to speak is a different bag of cats.

My talk went really well.  People thanked me for my truth and honesty, and I have been asked to come and speak in a few places around Devon over the summer months.  It feels really good to have set and reached a new goal.

My next goal related to being audible in public is to begin story telling and performance.  There are a lot of Muscogee (Creek) tales that I would like to share.  The story of Little Red Stick, a Mvskoke girl who ran away from the Removals to stay in her Homelands accompanied by Wolf and Spirit Bird continues to grow and unfold inside of me.  Her story will be a live performance with spoken word, music, art work and film projection. 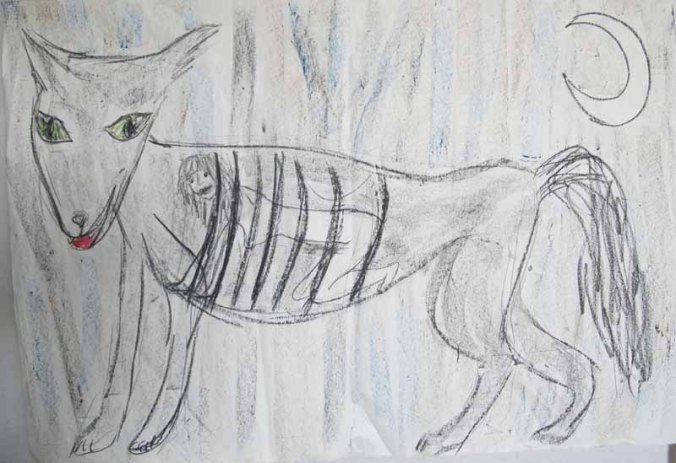