Together.
On a cold, grey winter morning
perched atop a bare tree.
– Melinda Schwakhofer 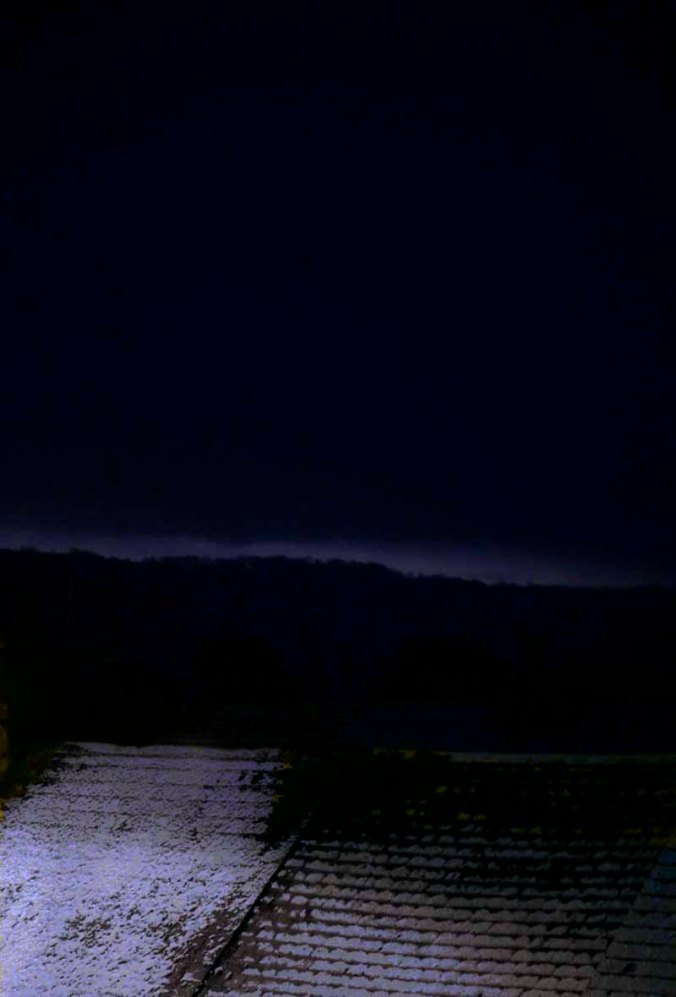 Beyond frosted rooftops,
beneath a snow filled sky,
dawn breaks.

For the past couple of years, I’ve been making a Yuletide tree from branches and lights.  This year, on my way to gathering some hawthorn branches, I found some fantastic shoots in a hedgerow.  I used these to make a little forest of winter trees.

The Muscogee word for winter is rvfo, pronounced ‘thleufo’.  It translates to ‘the season when things get skinny’.  Winter is the time of year when the earth’s energy withdraws.  Accordingly, I place my lights at the base of the branches to reflect this.

I made the base from two thick pieces of Styrofoam I’d saved from a delivery.  I arranged some fairy lights around the base of the trees.

To diffuse the lights I topped them with a double layer of sheer white cotton organza and a sheet of micro foam. 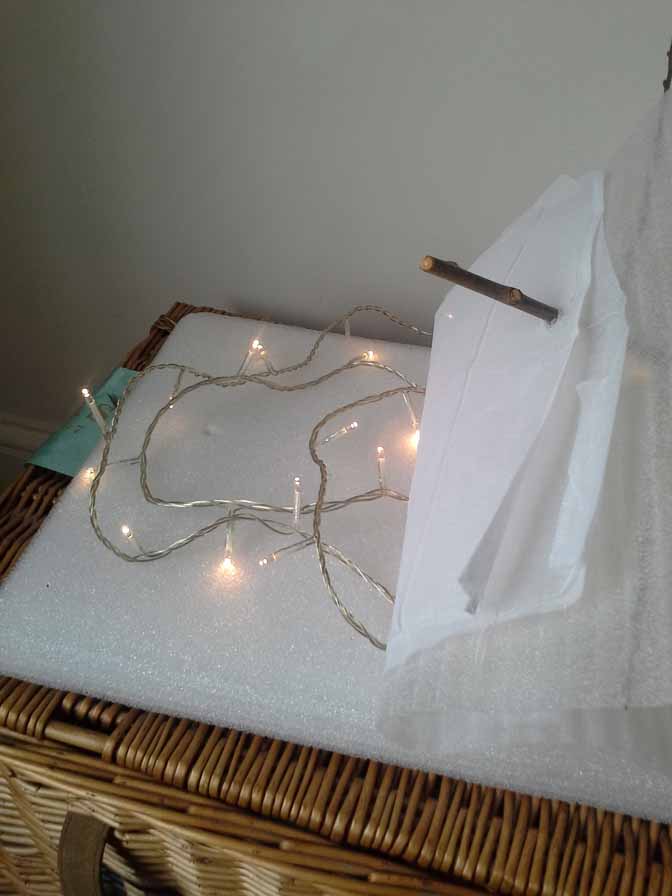 I hot glued each tree into the Styrofoam base.

Then, I pinned down the edges of the fabric to cover the lights and added a few garnet beads. 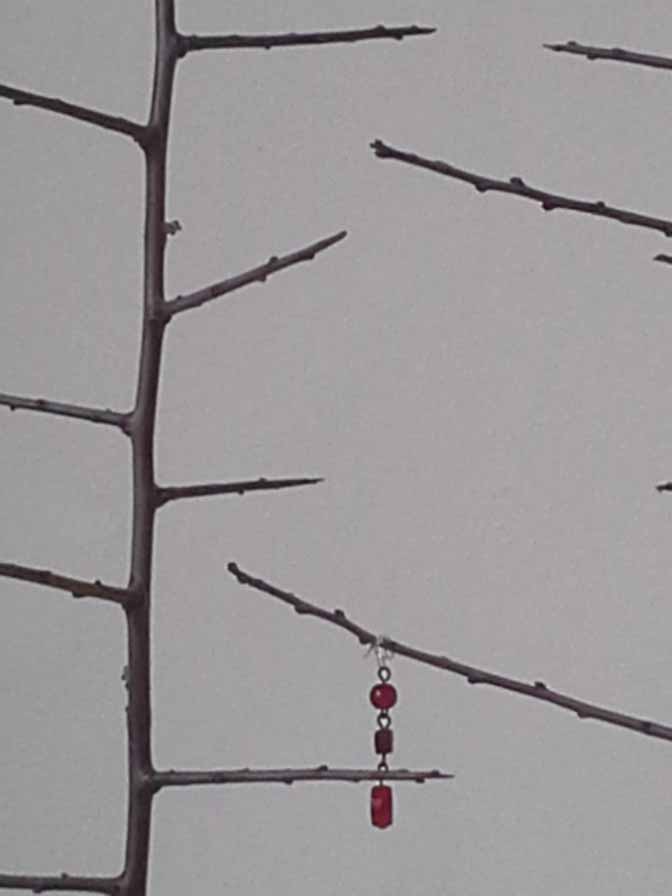 This is what it looks like at night; when darkness falls, the light shines out the brightest. 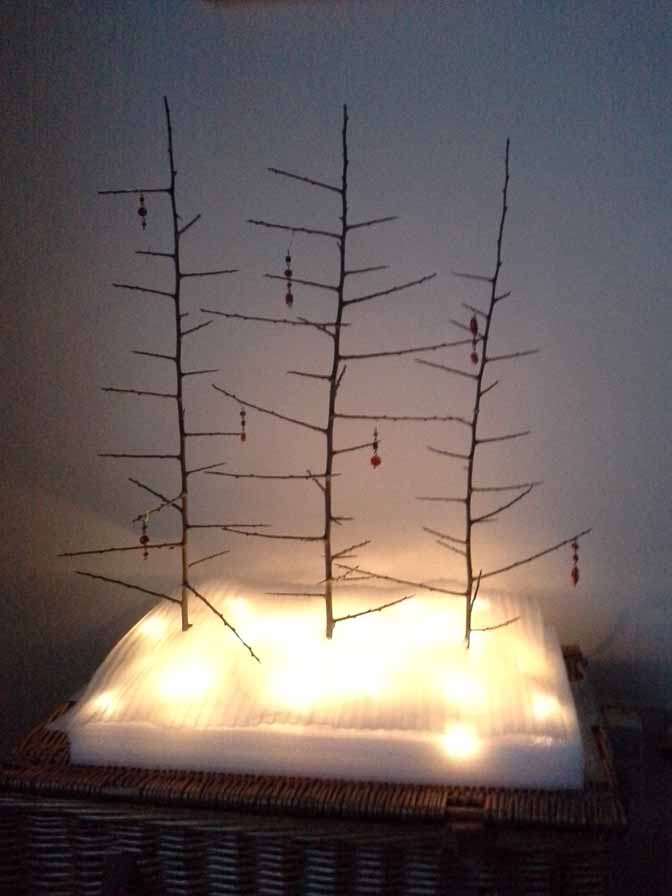 I also made a Yule tree from hawthorn branches.

May we all count the fullness of our blessings
and celebrate the richness in our lives during this deep winter festive season.
Love to you all!

The Christmas and New Year festivities have finished.  I feel a bit sad that the warm, bright times have passed.  We are still keeping warm and brightly lit against the dark and cold, but that extra feeling of  celebration has gone by.

The Christmas holidays were very lovely this year.  Steve and I hardly left the house and didn’t socialise at all for about a fortnight.  In the UK, the country pretty much shuts down during the week between Christmas and New Year.   Now, the familiar routine of work, exercise, drawing class is getting underway again.

My thrice weekly walk to the gym is especially beautiful during this stark time of the year.  I love the patterns of twigs and tree branches against the bare winter landscape.  Just the other day, I remembered that the next seasonal, countryside happening to look forward too will be snowdrops and primroses appearing in the woods and bases of the hedgerows.  But I don’t want to wish away this quiet beauty just yet.

On the day of the Winter Solstice, the clouds looked like angel wings.

Moon held in a net of switches

Clouds caught on the ends of hedgerow shoots

The weather has been windy and very wild, with storm after storm pounding in from the Atlantic.  It turned very cold at the end of last week.  Friday morning woke us with hail pelting against the bedroom window.  The winter tree out back was framed in ice. 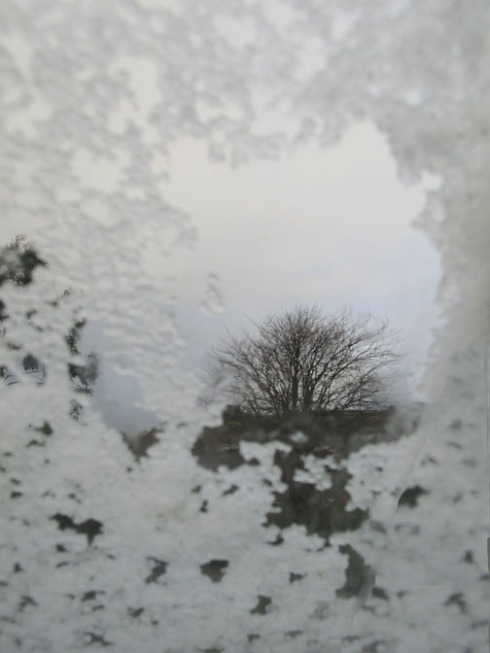 One of my favourite Christmas carols is set to a poem by Christina Rossetti.  In the Bleak Midwinter was written in 1872 and published after her death, in 1904.  This is such a beautiful drawing of her by her brother Dante Gabriel Rossetti.  You can click on it to see a bigger version.

In the Bleak Midwinter

Our God, Heaven cannot hold Him
Nor earth sustain;
Heaven and earth shall flee away
When He comes to reign:
In the bleak mid-winter
A stable-place sufficed
The Lord God Almighty,
Jesus Christ.

Angels and archangels
May have gathered there,
Cherubim and seraphim
Thronged the air –
But only His mother
In her maiden bliss
Worshipped the Beloved
With a kiss.

What can I give Him,
Poor as I am?
If I were a shepherd
I would bring a lamb;
If I were a wise man
I would do my part;
Yet what I can, I give Him –
Give my heart.

The poem became a Christmas carol after it appeared in The English Hymnal in 1906 with a setting by Gustav Holst.  Here is one of my favourite versions, sung by Pierce Pettis.

Not all of the birds have flown south for the winter.